May 25, 2008
KENNETH M. HARVEY AT HSBC HAS HAD A LASTING impression of an IT leader for me. And I believe in the capacity of a corporate executive, 'richness' (see: Money) has more to do with quality of role, thought leadership and budget at disposal.

In all of these terms, one might wager, Ken Harvey indeed must be a very rich man, for him being the group CIO of the world’s largest organisation, and then having a whopping USD 5bn in terms of his annual spending budget.

It always felt great to conclude my induction sessions for the newly joined Business Analysts in my team by saying, "While certain organizations (vendors) aspire to make millions every year, Ken plans to spend in billions..." It rather gave everyone, me included, a sense if you like, of having a bundle or two of "cash" from Ken's kitty into our pockets.

I specifically recall Mr. Harvey’s discussion with the Gartner members where one of the panellists posed him with the question of the challenge of keeping motivated the global workforce of nearly 25000 IT professionals. What Mr. Harvey replied is pretty interesting. Mr. Harvey suggested that the workforce worldwide is like a huge diversified but united team where:


"The out-of-box ideas come from my California office, for planning I give it to my London office, and for execution, it is my Asia (HK/India) office..."

While the lion's share of the budget goes towards the 2 tbps dedicated worldwide network that the bank privately maintains under "run-the-bank", the "change-the-bank" quadrant still attains a hugely sizeable amount for the change-agents (like myself!). And then, spare a thought for the contribution this 5 bn makes annually towards the IT economy worldwide, and also to the net-worth of individuals... For the record, I am quoting Mr. Harvey here that he would want to maintain a list of no more than a dozen suppliers and vendors... Statistically, the sum of 5bn in itself is more than the annual GDP of many countries worldwide (and could perhaps make for an outright buyout of a few islands in the Pacific). On the other hand, we are talking about only a handful of IT service providers splitting the billions among themselves. And this spending is sustained whilst the market is feeling the sub-prime heat. 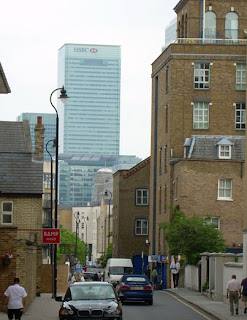 But then, Mr. Harvey never said it would be easy: the bank commands some of the lowest billing rates from IT providers in the industry, the roles are stretched to the limit of imaginations, and requirements happen and change as dramatically as the Hang Seng index of Hong Kong stock exchange which practically runs on Mr. Harvey's servers.

Here is some indication as to how Mr. Harvey planned about spending USD 5bn. And here is a Reuters report suggesting how it finally paid off.

Update: As of 2008 HSBC merged operations with IT under its 'One HSBC' strategic initiative. Mr. Harvey was appointed as the President of the new initiative.