June 02, 2008
A COUPLE OF MONTHS AGO I was sitting over the fence of 80% and 20% of the opinion makers reacting to the possibility of success of the IPL business model. 80% were the sceptics and believed that as it happened with ICL (Indian Cricket League – Chaired by Kapil Dev and sponsored by Zee Entertainment), IPL would find very few takers – perhaps only the useless of the useless lot would devote time to this remix masala version of the gentlemen’s game. To my mind, both these Indian T20 “cricetainment” versions were not at par: ICL was but a “zee thing”, where as the Premier League had the mind, money and muscle backing of BCCI – an important element that could make it swing and bounce. 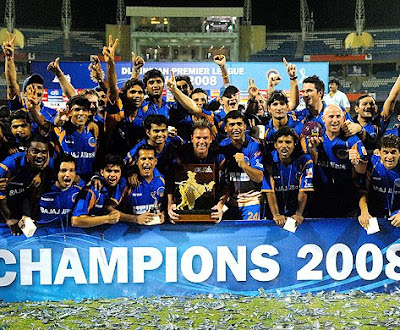 [Above: Team Jaipur after winning the maiden IPL. 1 June 2008. Source: http://ipl.indiatimes.com]
It appears that this compressed format of the game may not have gone down too well with all quarters of the cricket, especially the British media and "empirical" standards. Lord Archer, for example, has been quoted saying during his hugely successful India tour last month that Twenty20 is entertainment and not a cricket. Lord Archer may offer a dead defensive bat, and silly mid-on and Shane go up in appeal to Billy nonetheless, the whole of the stadium also erupts in asking the same question. That essentially is the appeal of the game. Spectacle.

Twenty20 is not going anywhere, and while the possessives (or the hypocrites like Ponting who, after getting a hefty pay-cheque for just a couple of appearance at IPL, goes back to leading the test squad and condemns the T20 format), cling to the ‘real’ word for Cricket, the economics are hugely against them. Fundamentally, I tend to agree that the game is played for the honour and patriotism, and that motive is now being played now purely for money. And the players are like hired "mercenaries" in certain cases. But sport, as much as it may be for the spirit, is also about entertainment, and while the contemporary youth is on a fast track for almost everything in his life, let T20 be a door for him to enter and sustain interest in Test Cricket. Let the format have best of both the worlds of English Premier League Football and American Baseball. While visiting the US I found it very difficult to convince my American boss that there could be a game that goes on for five days. Worst still, people go and watch it! Now I have something for him to relate to with his favourite Baseball team - LA Dodgers. (And then, there surely were some American cheerleaders around.) Let’s say that a Test match is like a grand five-course unlimited dinner, compared to which an ODI is like a limited lunch, and so T20 is but a quick snack or a breakfast. 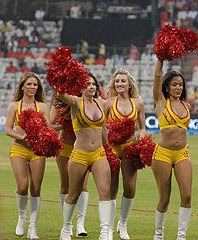 Having said that, the likelihood of T20 eating into the limited format of the game (ODI) is pretty strong – a brunch, if you like. (Did you hear also or is it only me that they are thinking of renaming BCCI? The new name got to be BCCCI - Beware of Cricket Crazy Countrymen of India.)
[Right: Washington Redskins cheering for IPL in Bangalore. Apparently, Bangalore Royal Challengers had "Bangalored" that job to the US.]

I suppose it was Geoffrey Boycott who, while commenting during India's tour to England, first put forth the point that ODI is a Batsman’s game, for all the rules are against the bowlers regarding what they could do, and more importantly, what they can’t. The situation just got worse, and we have Twenty20 where the bowler is to be slogged. Or that’s what the initial impression was. It turns out, such is not the case, for all the important games did a turn-around mid-course because of some very clever bowling – be it Mumbai Indian’s ouster from the IPL because of a sad last over finish, or be it “Balaji – the weak-link” for Chennai Super Kings whose rather stupid last over did them in and they lost the trophy. (It was a rather modest Dhoni, with his first-time-on-TV huddle of his team on the ground before getting into the dressing room after the defeat in the finals, that he said it was a team effort, win or loose, and there was no one single event or player to be singled out or blamed for. A leadership quality that better not be lost on the likes of the "legendary" Tendulkar who, rather curtly, passed the buck of loosing out of IPL to the Sri Lankan Dilhara Fernando who bowled that last over.)

BCCCI - Beware of Cricket Crazy Countrymen of India...
Warne’s squad was considered an underdog on the ground that they didn’t have any star player (and where of the cheapest bidding of the eight during the auction). Somehow, I disagreed with that statement. Rather I considered Jaipur team a real good value-for-money for the bid-winners. Warne is no less than a legend in his own right, and when you have the captain of the South African team also as your opener, you surely have a side to reckon with. If at all someone would want to consider them as starting underdogs, the reason has to be that the total squad didn't had the best of the commercial value at the bidding time. And then again it was the error of judgement on the bidder's part then anything else (one more indication to this effect is that Anil Ambani is rumoured to have backed out of Royal's bidding at the very last moment for Ahmedabad, and the team was won by Jaipur). The real important part, however, was the captaincy by a leg spinner: IMHO successful spinners are born tacticians; shrewd and deceptive in their strategy and their main weapon. This may not be the case with the fast-bowlers who depend on their physical strength for pace more than anything else. Warne’s so-called "role-based approach" to the game might have given him the first IPL success, but it would be extremely difficult for him to repeat it in the comings seasons, and I am almost certain that he is also aware of it.

Some Trivia and Not-so-trivia about the IPL - maiden season: