The Fastest Men at the Olympics

August 16, 2008
IT TAKES YEARS TO SHED SECONDS OFF RECORD TIMINGS, and that has been the order of all major sports event, especially the Olympics Games. "Faster, Higher, Stronger" (Latin: Citius, Altius, Fortius) is the motto of the Olympics events, and whilst it absolutely lives up to that expectations, the bar thus raised however poses faster, higher and stronger challenges to the human capacities; every single time. (Mr. Ketan J. Patel, founder and head of the Strategic Group at Goldman Sachs, in this very interesting book "The Master Strategist" published earlier this year provides a very interesting analysis and analogy on the topic of such a human endeavour where Patel observes that we indeed live in the age of extremes.)

Usain "Lightening" Bolt of Jamaica is clearly my hero of the 2008 Summer Olympics games at Beijing, as with many others. Here is an athlete in what is called a championship form - with spirit exuberant that "no one can beat me today" - and to borrow the simile from Abraham Maslow - "Peak experience" in motion...

Three times, in three days, shattering three world records - Human spirit at its foremost, for, unlike a machine-like race for the next milestone, one did pause to marvel the moment and live in its spirit.

[Usain "Lightening" Bolt of Jamaica betters his own word record by 0.03 seconds at Men's 100m sprint race - the event that virtually decides the "fastest" man on earth. Bolt not only took a convincing lead among the pack, but maintained it all along and started celebrations even before the finish line was ten meters away; all this within sub-10 seconds time-frame. Above: Take a look at this footage from the stadium.]
And then there is Michael Phelps of the USA, the most decorated athlete of all times at the Olympics, winning eight Gold medals in eight aquatics events - getting a Gold in all events in which he participated at 2008 Summer Olympics games, and setting a record for doing so also. Phelps is special in more ways than one. 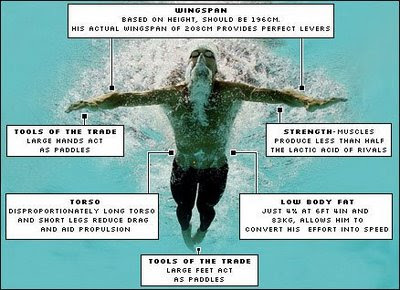 [Steve Parry finished on the podium beside Phelps at Athens 2004. While Phelps captured Gold and set a new WR, Parry at the same time set a new Commonwealth record for the same event in aquatics. Above: Parry analyses how Phelps is 'special' in the pool.]

[Go here for the Amazon book reviews of "The Master Strategists" by Ketan Patel.]
[Go here to watch Bolt during his M 100m final on the official YouTube broadcasting channel of Beijing Olympics. These clips have very little chance of being removed.]
[Go here for the detailed analysis by Steve Parry for BBC.]