August 11, 2008
FOR THE FIRST TIME EVER IN THE HISTORY OF MODERN INDIA as well as modern Olympics, the Indian National Anthem was sounded for the podium Gold position in an individual event. A moment of pride for any Indian national/origin anywhere. The German media person standing nearby the Indian supporters' stand at Beijing Shooting Range Hall was as perplexed as the Indians themselves. The German was stumped for his lack of knowledge of India never making it to the Gold in the history of the nation or the games; the Indians were stumped and elated of course because their shooter finally made it!

It is perhaps the best gift that India ever received from a peaceful sports event thus far. Abhinav Bindra, the 26 year old businessman from Chandigarh, an MBA from USA and CEO of his own video-game company, at his third Olympics appearance aimed a near perfect bullseye in 10m Air Rifle event and brought India home with its first Gold in an individual event at the Olympics - classic or modern. And when asked by a TV channel during an interview, the medal barer didn't mince his words while saying, "I wonder why it took [India] so long..." 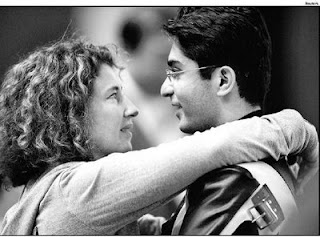 It is a gift to the nation because this self-financed, self-trained, self-sponsored effort by an individual from an affluent background comes from trainings in South Africa and Germany with the help from a Swiss coach. "Gaby" Bühlmann, the personal coach of Bindra, participated in 10 shooting events at five previous Olympics for Switzerland; the last one being at Athens 2004. Bindra has his personal Olympics-standard shooting range facilities built by his father in their own backyard, and he has been training far away from the official, government provided, and Indian Olympics Association sponsored facility at Tughlakabad outside New Delhi that has not received any upgrade to the equipments since 1980's.

And while most predictably as Bindra becomes the new darling of the news desks across India, interestingly two Chinese national daily also featured him on full-size front page coverage - albeit, the headline read, a rather tongue in cheek, "At Last!"

This may be Indian sports coming of an age. The public-private partnership is evident yet again, with reports of the steel tycoon and the richest man in the UK, Laxmi Niwas Mittal funding at least 14 Olympian hopes for India, including Bindra. Mr. Mittal runs his Mittal Champions Trust from London, and reportedly employed a physical trainer, a psychologist, and supplied ammunition for practice for Bindra when India ran out of bullets for the Olympics team.

There were no bidders for the 2008 Olympics telecast for India, and the rights for the entire event were finally picked up, with a bare minimum chance of breaking even, by the I&B ministry for national career DD Sports for USD 3mn (which was the price for just a couple of icon player at the Indian Premier League Cricket auction. The broadcast rights for India for the IPL event as a whole were sold at slightly over USD 1bn).

Formula One was a no-show in India only five years ago until Karthikeyan came on the scene as the first Indian driver for the Grand Prix race, and F1 has picked up since then in the country - with India sporting its first ever full fledge racing team - Force India - starting this year. Moreover, an F1 race circuit at Noida (near New Delhi) is under construction for inclusion in the F1 calendar by 2010 season.

Could Bindra's feat do something similar for the Olympics in India?
Perhaps.
How about Indians' call for Cricket's inclusion in the Olympics?
A Twenty20 Olympics... Why not?

Edit: new links have been added for "Gaby" Bühlmann , Laxmi Mittal's funding for Bindra, and others.