Indian Epic Goes Back to the Future: Ramayan 3392 AD

November 16, 2008
RECESSION, DEPRESSION, TERRORISM AND TERMINATIONS are rife. Someone said, we live in interesting times. And that makes me wonder about the difference between 'desperate' and 'interesting'.

The recent data shows that Beer consumption worldwide is on the rise, and the entertainment industry is all set to launch one mega project after another. Re-session!? On the same lines, Scott Thill of Wired magazine reports interviewing Gotham Chopra who is a part of the management team at Los Angeles-based Liquid Comics.

Liquid Comics is in the process of re-telling the nearly 500 centuries old Indian (Indic?) story of Ramayana as it would be set in 3392 CE. In other words, their project is to transport a tale through six millennia.

[Above: An artists rendition of the "Future" Ramayan where Lord Ram (the hero) is being carried on the shoulders of Hanuman (best supporting cast).]
And who knows, if the warmongerism under the shadow of terrorism (or the other way around!) continues at the same pitch of today, Albert Einstein might be proved right yet again - World War IV would be fought with stones, bows and arrows... Just like Ramayana! 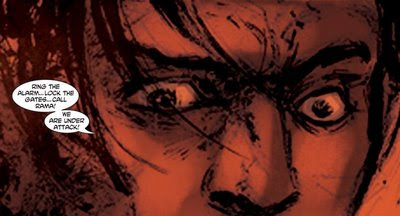