Mushroom Management Theory: Keep employees in the dark and fearful, feed them manure and dung, watch them grow and when they grow enough, get them canned. (try here for more at urban dictionary)


IN QUITE A CONTRAST TO THE PREVIOUS post on model leadership, this is not only a different type of leadership, it is found being practices widely as well. Referencing their publication for this month (June 2009), John Landry of Harvard Business Review writes that Lehman would not have happened if they would have allowed a freer flow of information, or made it easier for employees to raise their concerns. Industry observers have drawn parallels of Lehman explosion with implosions of Enron and WorldCom citing the same "keeping in dark" issues where information is not shared.

But before that, a brief 'story':


Tom is the leader of the designing team for a computer company, who is working on a plan B in case the main project fails. Eventually, the main plan fails and the backup plan –code-named "Eagle" – becomes the company's only hope in catching up with the competition.
Tom has a bunch of college freshers as the team, who have never designed anything in their life before. On the other hand, Tom has to grapple with new technology and tools to work with and for which he has no skill-set at hand.

Under pressure, his boss Edson and Tom employs Mushroom Management.

But finally, the "Soul" of the new design comes from the dedicated engineers who bring it to "life" with their endless hours of dedication, attention and toil.


This story is a reality. This is the central plot of The Soul of a New Machine

– a non-fiction book by Tracy Kidder that won the Pulitzer Prize in 1981 – one of the highest accords in contemporary literature. 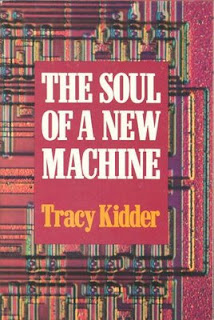 This true story talks about Data General Corporation (now a part of EMC corp) for which Tom West and Edson deCastro worked. And where they competed with DEC and VAX range of minicomputer systems (try here for a picture of Eagle/MV8000 minicomputer prototype. The market, however, was finally won a few years later by IBM with microcomputers, simply known today as a PC of the 21th century [or a Mac, for the Apple cult]).

James O'Toole and Warren Bennis, authors of the HBR research paper – What’s Needed Next: A Culture of Candor – examines the case and blames such mushroom management practices to the all-too-human insecurities on the part of the managers and management (try here). Their focus is on the big picture. After analysing, they urge the managers to lead the way by being as honest as possible, admitting mistakes, exhorting people to speak truth to power, and working at having difficult conversations with employees.

Following is an excerpt from their article – NASA's findings on the human factors involved in airline accidents:

"...the lesson of the NASA findings is simple: Leaders are far likelier to make mistakes when they act on too little information than when they wait to learn more. [the research demonstrated] that the pilots’ habitual style of interacting with their crews determined whether crew members would provide them with essential information during an in-air crisis. The pilots who’d made the right choices routinely had open exchanges with their crew members. The study also showed that crew members who had regularly worked with the “decisive” pilots were unwilling to intervene—even when they had information that might save the plane...”