IT IS PARADOXICAL, SOUNDS UNREASONABLE, AND DEFIES COMMON-SENSE. But that is how it works, realistically and evidently, for any hierarchical organization where the way of promotion rewards the best members and where the competence at their new level in the hierarchical structure does not depend on the competence they had at the previous level, usually because the tasks of the levels are very different between each other. Since about 50 years ago when a Canadian psychologist named Laurence J. Peter published his studies to this effect in 1969, there has been many changes in the way organizations and it workforce operate in relation with each other. There has been multiple experimental models across various industries, including Role-based organization, Competency-based designations, (A fusion of sorts of these two), flat-structures, circular organizations, and alike. Peter principle seem to have remained steadfast among all of these nonetheless.

In their study published a few days ago on Organization Efficiency titled "The Peter Principle Revisited" Prof Alessandro Pluchino and two other colleagues of the Universita di Catania of Italy argue that the long term consequence of Peter principle seems to imply an unavoidable spreading of the incompetence over all the organization and would be in danger of causing a collapse in its efficiency. The team presents a numerical study of Peter principle (arguably for the first time) which they presented as "agent based model" of managing organization efficiency. 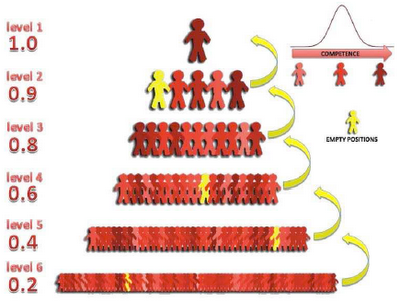 [Above: Agent Based Model -- The computational study of the Peter principle process applied to a prototypical organization with pyramidal hierarchical structure having 160 positions across 6 levels. On a lighter note, a colleague recently came up with his idea on the progression within the pyramid structure that the "lighter" the person in terms of work-load, the "higher" she floats towards the top of the pyramid.]
The "Common Sense strategy" is to promote the most efficient person up the hierarchy. However, the study argues that the best strategies to improve, or at least not to diminish, the efficiency of an organization, when one ignores the actual way of competence transmission, are those of promoting an agent at random or of randomly alternating the promotion of the best and the worst members.

Providing alternatives to the CS approach for promotions, the study illustrates two alternative strategies inspired by Peter Hypothesis wherein either a random person is promoted (incidental, which is also in line with Game-theory), or the best and the worst persons are promoted alternatively.