"The Right Thing To Do" - Harvard Lectures on Moral Philosophy


If you look at the syllabus, you would notice that we read a number of great and famous books. Books by Aristotle, John Locke, Immanuel Kant, John Stuart Mill, and others. [...] We will read these books, and we will debate these [philosophical] issues, and we will see how each informs and illuminates the other [school of thought]. This may sound appealing and interesting enough, but here I have to issue a warning:

To read these books, in this way, as an exercise in self-knowledge, carries certain risks. Risks that are both personal and political. Risks that every student of Political Philosophy has known. These risks spring from the fact that philosophy teaches us, and unsettles us, by confronting us with what we already know. There is an irony: the difficulty of this course consists in the fact that it teaches what you already know. It works by taking what we know from familiar unquestioned settings, and making it strange. [...] Philosophy estranges us from the familiar, not by supplying new information, but by inviting and provoking a new way of seeing.

But, and here is the risk, once the familiar turns strange, it is never quite the same again. Self-knowledge is like lost innocence; however unsettling you find it, it can never be 'unthought' or 'unknown'. What makes this enterprise difficult, but also revetting, is that Moral and Political Philosophy is a story, and you don't know where the story would lead, but you do know that the story is about You. Those were the personal risks.

Now, about the political risks: one way of introducing a course like this is to promise you that by reading these books, and debating these issues, you would become a better, more responsible, citizen. You will examine the presuppositions of public policies, you will hone your political judgement, you will become a more effective participant in public affairs. But this would be a partial and misleading promise. Political Philosophy, for the most part, hasn't worked that way. You have to allow for the possibility that Political Philosophy may make you a worst citizen rather than a better one. Or at least, a worst citizen *before* it makes you a better one. And that is because philosophy is a distancing, even debilitating, activity. And you see this going back to Socrates [and his dialogue with his friend Callicles who tried to talk him out of philosophising]. [...] Philosophy distances us from conventions, from established assumptions, and settled beliefs. Those are the risks - personal and political.

And in the face of these risks, there is a characteristic evasion. The name of the evasion is skepticism  It's an ideal. [It goes something like this] we didn't resolve, once and for all, either the cases or the principles we were arguing about when we began [with the case studies]. And if Aristotle, Locke, Kant and Mill hasn't solved these questions after all these years, who are we to think that we can resolve them? So, maybe, its is just a matter of each person having his or her own set of principles, and there is nothing more to be said about it. No way of reasoning. That's the evasion of skepticism. To which I would offer the following reply:

The aim of this course is to awaken the restlessness of reason, and to see where it might lead...

[Transcript-ed from the actual lecture. Emphasis added. Official transcript could not be resourced.]

Prof. Michael Sandel's class has commanded one of the highest enrollments at Harvard Business School of a thousand plus in a given semester at times. It is one of the most famous of all management classes at Harvard where Sandle is teaching since '80s after returning from Oxford, England. Recently, one such series of lectures was video-recorded and has been placed into (international) public domain [see details below] where one can virtually participate in the proceedings of Prof. Sandel's lectures. It is as much relevant as it is rewarding. 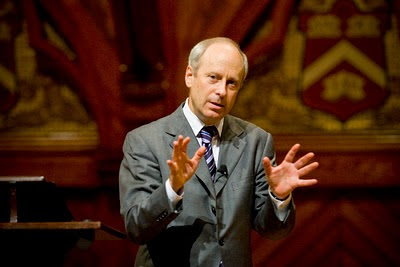 The foundation here is primarily of Western Philosophy. However, when one gets familier with the contents, it may emerge that many of the fundamental ideas debated by Utilitarianism with/against Categorical moral principles in these discussions have also been acknowledged, contemplated, and commented upon by eastern scholars at India's ancient established "Business-Political" schools such as Taxila. Folklore has it that (management) gurus like 'Chanakya' (sometimes, also 'Kautilya') of these times were entrusted with the mentorship of the princes. Where, arguably, Utilitarianism is more akin to Kutil-niti (Diplomacy) and Arthashastra (Economics). Categorical moral philosophy can be referenced with Chanakya's tactics on Raj-niti (Governance).

[Edit: P.S. A follow-up post may appear on this blog after studying the available lectures.]