April 30, 2010
FT point out:
- clueless senators falling over one another to score cheap political points but the sense that outrage against bankers in general, and Goldman in particular, has reached unhealthy levels.
- for millions of home owners and investors psychologically unable to admit at least partial fault for succumbing to the madness of crowds and lure of easy money.
- [an older client on the respect for the firm] 1982 when Puerto Rican nationalists bombed Merrill Lynch’s Manhattan headquarters. “Didn’t they know all the money and brains are at Goldman?”
And, finally,
- some even wonder whether the group’s perceived Jewishness has infected legitimate criticism of it with centuries-old prejudices. 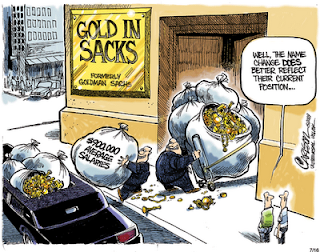