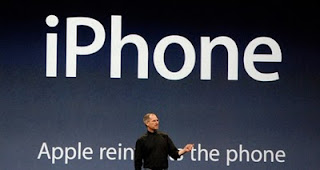 "This changes everything. Again"
AFTER THE WORLD'S LARGEST PRODUCT LAUNCH EVENT YET, on July 16 Steve Jobs did the press conference following the recent keynote for the world's largest IT organization that Jobs staged for the eleventh year running after his return in '99 to the (then struggling) company he originally co-founded in '76 as Apple Computers Inc.

Over the last two and an half years since the launch of the first iPhone, the competition has grown (and perished) in the smartphone product space. The information hungry, instantaneously reacting, viral population of Social Media 'journalism' was increasingly demanding of this Silicon Valley veteran from 1, Infinite Loop, Cupertino, CA, USA.

Apparently, Apple's latest offering of iPhone 4 smartphone with services from AT&T ran into media highlighted issues of a certain "loop antenna" problem where the device was dropping calls if the user happened to hold the device in a certain manner. (Rather interestingly, the same device did not seem to have any such issues in geographies other than the US. where media and service provider coverage were different.)

Jobs presentation at this press release to address the 'issues' was very effective, and some of the key attributes of his presentation skills have been captured below:

Have a laser-sharp focus on audience expectation: "relevancy" runs the highest among people noting, tweeting and blogging in real time during the key presentation events.

Give the audience a pleasant surprise by always having something new: content of the presentation has to be novel or newsworthy. There is no use regurgitating previous press releases or old news.

Forget bullet points - perfect your slide design: design slides with images instead of text, with crisp lines which is not only short and quotable, but even if it's taken out of the context of his presentation, it still makes sense.

Repetitions and consistency: take time to summarize the points, even if they are many. Build intended-redundancy to the presentations that helps drive home the central message.

Evangelize! draw the audience to join the ‘cause’, the main theme of the presentation. If required pitch in the competition with Us-vs-Them scenarios.