November 07, 2010
TED PRIZE IS AN ANNUAL AWARD INVOLVING USD 100,000 AND SUPPORT TO AN IDEA TO CHANGE THE WORLD. The 2011 prize has been awarded to someone only known as JR. It is believed to be a French photographer and artist, who anonymously painted and created installations on the walls of the world – mainly the urban slums. Known as "pervasive art", JR took help from urban volunteers to create black & white paintings on large urban walls and highlights the burning issues of the city and the region.

Writings on the wall, literally.

While the Guardian featured him as "the hippiest street artist" earlier this year, the 27 years old prefers the term "photograffeur", adding that, "If there is one thing I've always taken care of with my work, it's that it's never an advertisement for anything other than the work itself and for the people it's about — no 'Coca-Cola presents'". Fiercely protective of his anonymity, he actually appeared with sunglasses and a hat when the TED organizers first got in touch with him on Skype after the prize announcement. The anonymity is crucial for his work. It allows his to travel freely and take on large projects, and it also helps avoiding the distraction away from his actual work and the main message. Representing people living on the margins, JR's anonymity goes with his philosophy of representing the nameless. 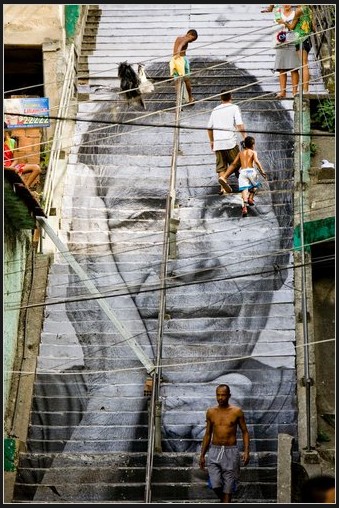 [Above: "Giving Slums a Human Face". Source: J R/Agence UV]
In his late teen years, JR found a camera dropped by someone in the Paris metro and took on photography from there. He sampled various graffiti artists across Europe for a couple of years, and in 2002 started work on his first major project. In 2003, two major photographs were discovered on the walls of Paris and Rome each. "Portrait of Generation" came after three years when the slums of Paris witnessed huge portraits highlighting the marginal population. In 2007, eight cities on either sides of Israel-Palestine border found installations by JR involving photographs of a rabbi, imam and priest. This was the largest illegal exhibition of its kind in Europe. The following years found him in different countries of Africa, South America and Asia (see the trailer for "Women Are Heroes" below).

The coveted TED prize money may not seem as high as other contemporary awards, but the real deal is with the one idea that JR can put forward to the TED community at large towards implementation. TED can mobilize its global reach of motivated individuals, garner large corporate donations through its affiliates, and provide platform for debates, discussions and diffusion of the ideas. JR has been surviving on money generated through various auctions of his art, which goes towards expenses of prints and materials of his various larger-than-life campaigns. The financial aid shall help keep JR independent as he is, and the limelight through TED could inspire similar artists to take up social causes of similar nature. The British celebrity chef Jeremy Oliver was the winner of the prize last year, and his TED 'wish' has been a war against obesity. The year before, former American president Bill Clinton was the winner, and he channelized resources towards rebuilding the health-care system in Rwanda.

When the Ted team reached out to him, JR was in Shanghai campaigning against the destruction of older buildings and habitats of the elderly and the poor. He said that he had learnt of the award only recently and hadn't thought about the 'wish' yet, though it was to be on the same line as his campaigns in the slumps of Brazil, Cambodia, and Kenya. Further, the apparently bigger challenge than deciding his wish would be the impact that such limelight might bring to his anonymity and freedom to operate.

Following are some of JR's "ideas worth spreading":

"Women Are Heroes" - part of the campaign that took place in Kenya: (at YouTube)