January 23, 2010
BusinessWeek RAN A STORY LAST MONTH that focused on "Jugadh" and termed it as the new mantra for innovation. Colleagues and clients not too familiar with the Indian culture tried seeking second opinions on the word. Observers commented on the topic from the world over. Some compared the term with Quality techniques such as Lean and Keizen - doing more, with less. Others saw it as the new Agile. Jugadh or Jugaad was considered by the Economist as the latest cost-cutting technique in Asia. WSJ wrote that Jughad is the primary reason why Indian economy remained insulated in the recent Global economic down-turn. Someone else commented that ISB at Hyderabad conducts special workshops to tool executives with Jugadh, also citing the inclusion of the term in the management consulting arsenal. The original title of the article looked at "Jugadh" as the next big export from India.

After due considerations and with due respect to all the views, "Jugadh" is a fad of a business model on the face of hard-core and global requirements for sustainability. To put is into the right perspective, it is rather unfair to model Jugadh either as a new form of innovation or as a path breaking and business changing technique.

The Hindi word Jugadh or Jugaad (de: जुगाड़) literally means a noun referring to an improvised or jury-rigged solution. Wiki traces the root of the term to the farmers of northern India employing indigenous ways to make use of the domestic small diesel engines for multi-purpose transport and similar make-shift usage. There are indigenous ideas like these which can be categorised as Jugadh, but they are by far a minority. In the broader sense of the practical life, however, Jugadh can be described as what Bear Grylls does on his reality TV show "Man vs. Wild" on the discovery channel: some cleaver survival tactics, a desperate measure but with some spin of intelligence, the basic human instinct of improvisation over the most rudimentary of the tools. That is Jugadh; a poor desperate man's innovation, where: Dependence on luck or accidental favours is too great; Against the rewards the risk is usually too high; And measurability, predictability, controllability and repeatability are too low. And it does not matter who opens a "Jugaad" office in Electronics City, in Bangalore.

I am not sure if Tata Nano is the right example of a Jugadh - it just happens to be one very cheap car from India. Neither it is fully agreeable that people in India are risk-averse - historically, India has one of the most risk taking trading and entrepreneur communities in the world

. Likewise, considering Jugadh cleaver without appreciating the risks associated with it is but a mistake. A "Jugaadoo" arrangement - by its very application and circumstance, is only a temporary measure. A hope, if you may, largely thanks to Darwin, of doing better by using inherent human intelligence while the resources are scarce. And then, there are ethical issues when short-cuts and cutting of corners become integral parts of "Jugaad-ovative" solutions. 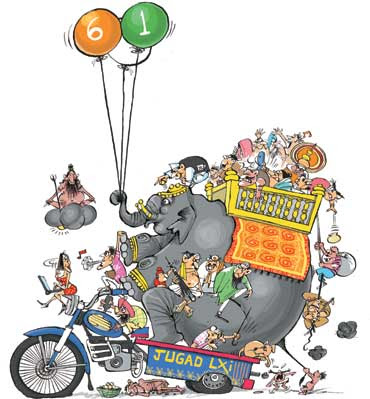